Co-Founder and VP of Marketing

Mada co-founded Branch in 2014, masterminding the community-driven marketing strategy behind the company's early, explosive success. Mada currently leads marketing and new market development for Branch, and she remains deeply involved in the company's global culture initiatives, which have led to several industry awards.

We know that user acquisition is tough. If you spend time running install ads, creating referral programs, and building sharing features for your app, you see many types of links to your app being shared and clicked. Unfortunately, you can’t get many insights from this data.

Which links drive installs? Which device types or channels convert the best? Today, Branch links power thousands of apps, over 300 million devices, and help thousands of developers close the loop on the click-to-install attribution. With this much info, we’re learning a ton about the mobile ecosystem that we’d like to share with you. To start, we’ve aggregated the data from 12 million different link clicks to show you which channels, platforms, and countries perform the best. 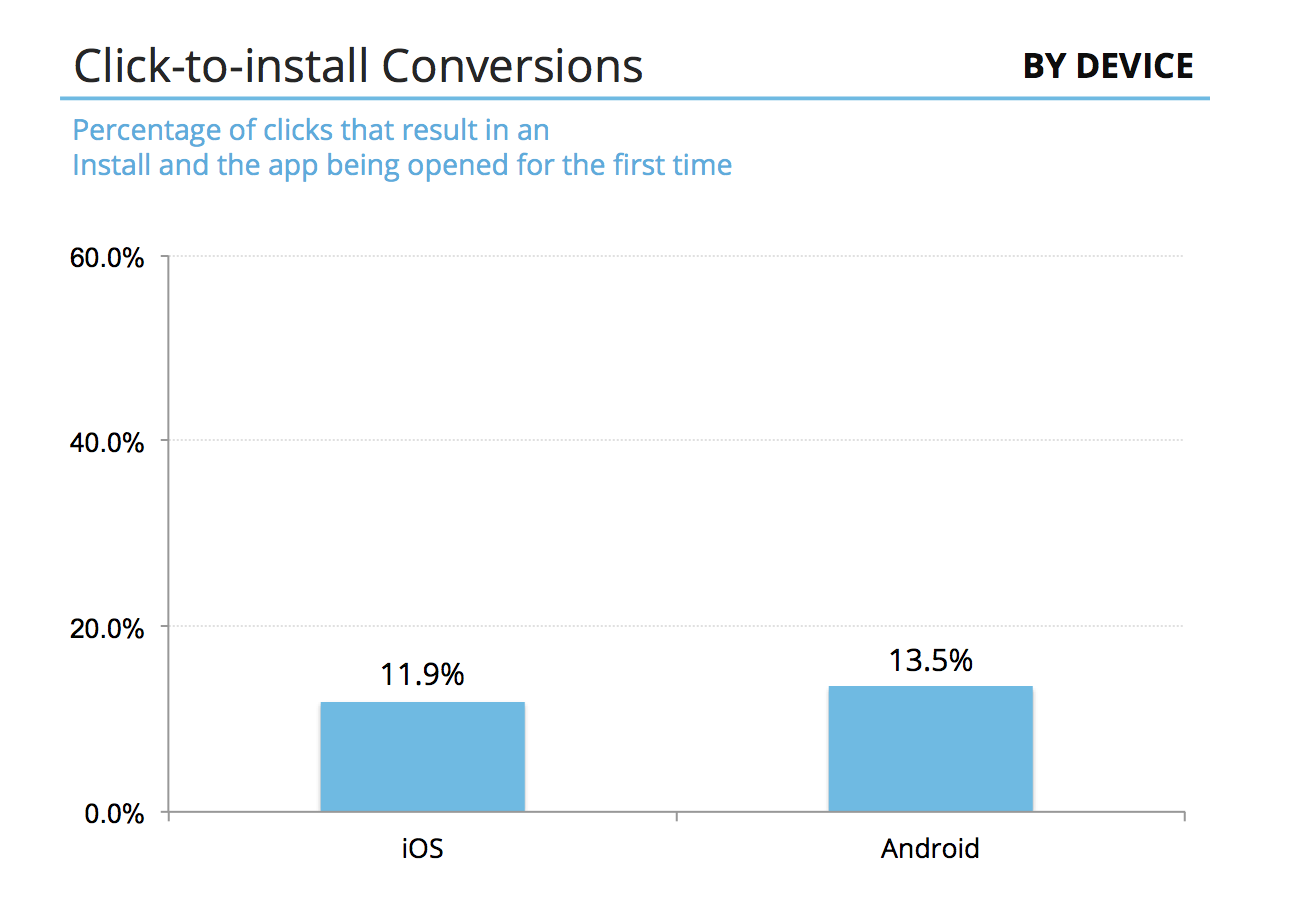 Based on our data, click-to-install rates are slightly higher on Android than iOS. That’s probably due to download times: Android apps tend to be smaller, so they take less time to install. (Note: This data is for an attribution window of 30 minutes. Some solutions use week or month long windows between click and first open in order to reflect higher conversion rates).

Branch breaks down the “shared links” category into the following:

Channel-based comparisons are important for developers and marketer alike, so they can determine how to best allocate resources. The data doesn’t lie: Facebook and SMS convert the best. Facebook provides the most context while SMS is sure to keep users at the site of the install, on the device itself.

Country by country, our study saw a strong correlation between conversion rate and network speed. The US lagged behind in both.

Ever wonder how much time passes between a link click and the first app open? The answer: usually no more than five minutes, and almost never more than thirty. We were pleasantly surprised by these findings. We thought channels like Facebook and Pinterest would have a lower conversion-to-install in the first minute because their users are known to get distracted easily. What we found was the opposite. Facebook and Pinterest had the highest percentage of opens in the first minute of someone clicking a link. 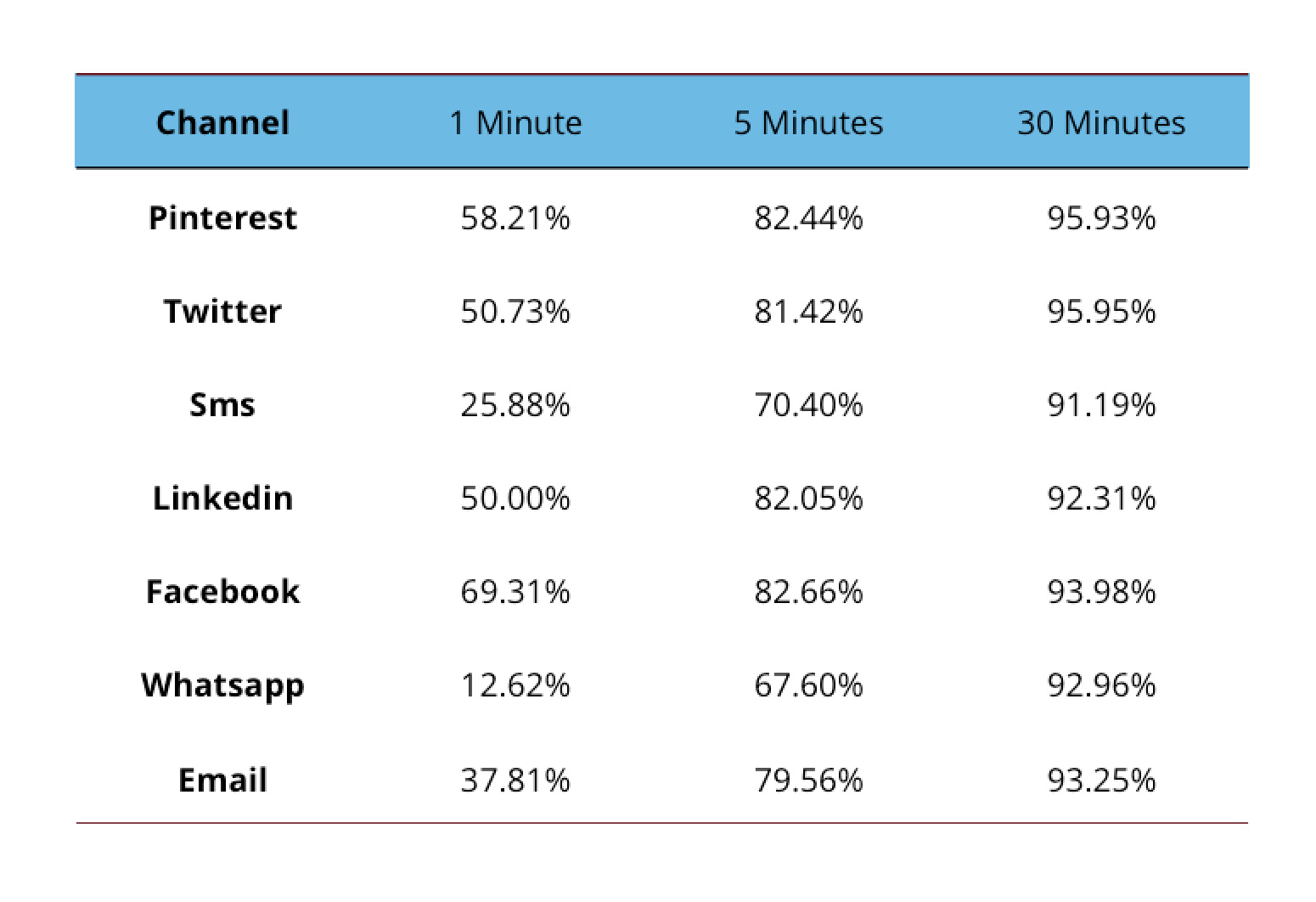 Branch’s goal is to help you build the features and links that will allow you to grow your app. We know that data means everything to an app developer, so we wanted to share our knowledge with you. That’s why we’re excited about Deepviews, because our data shows they result in a significantly higher click-to-install rate compared to routing users directly to the app store. Best of all, if you’ve already integrated Branch, setting up Deepviews is as easy as clicking a button. Ready to get started? Click here to request a Branch demo.

Find something especially helpful from this data? Let us know below.

Special thanks to Kan Yu, our amazing data scientist who analyzed over 12 million link clicks to make this report possible.

Co-Founder and VP of Marketing

Mada co-founded Branch in 2014, masterminding the community-driven marketing strategy behind the company’s early, explosive success. Mada currently leads marketing and new market development for Branch, and she remains deeply involved in the company’s global culture initiatives, which have led to several industry awards.

Branch provides the industry's leading mobile linking and measurement platforms, offering solutions that unify user experience and attribution across devices and channels. Branch has been selected by over 100,000 apps since 2014 including Adobe, BuzzFeed, Yelp, and many more, improving experiences for more than 3 billion monthly users across the globe. Learn more about Branch or contact sales today.

How To Find The Right Deep Linking Solution

How Gambling Companies Lose Out by Not Looking Outside Their Industry

Get the latest mobile knowledge

To help you fuel cross-channel and cross-platform mobile growth, our team works hard to deliver the most current, relevant resources.